On Sunday, November 1, 2015, the Friends of Rich Hill will be hosting a special event called, “Behind the Walls of Rich Hill”. 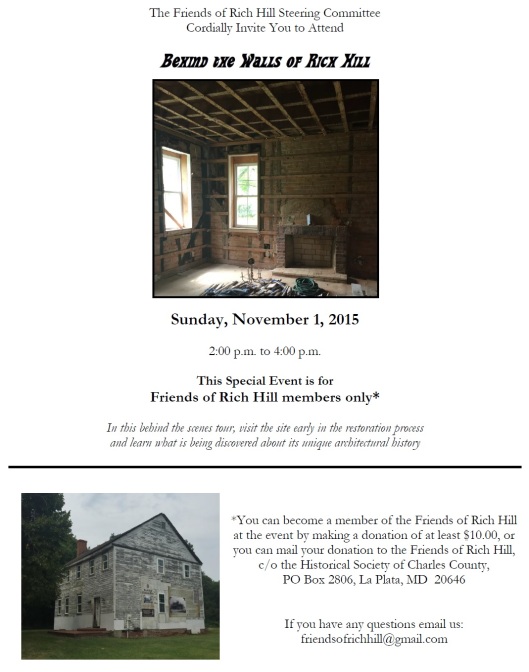 This special “behind the scenes” look at the ongoing restoration of Rich Hill is for Friends of Rich Hill members only, however you can become a member on the day of the event by donating at least $10.

This is a unique chance to see the architectural “guts” of Rich Hill before they are covered up again during the restoration process.

Since its acquisition in 2014, restoration planning continues at Rich Hill. In early 2015, Charles County contracted with The Ottery Group, who have extensive experience in working with local governments to develop sound preservation strategies for historic properties under their care. Preliminary documentation and structural assessments were initiated in April 2015 and are expected to be completed by the spring of 2016. The first phase of the site rehabilitation consisted of demolition of the 1970’s-era interior finishes in order to assess the structural integrity and the condition of the historic frame.

Ed Barnes of Atlantic Heritage examines the frame for surviving evidence of the original 18th century roof system. The original hipped roof was replaced by the existing gable roof in the early 19th century which drastically altered the appearance of the house.

David Berg, our architectural historian and consultant had this to say about the project:

The Ottery Group is genuinely excited to assist in the preservation of Rich Hill. Now that we have determined that the house is structurally stable, we have begun to look at both the documentary and physical evidence to determine the construction and appearance of the house as it existed both during Booth’s time and in the eighteenth century. These investigations will enable us to make informed recommendations for the preservation and interpretation of this important historic resource for future generations.

Archaeology is also underway to understand the 1865 appearance and use of the dwelling. As part of the 150th anniversary of President Lincoln’s death, archaeologists explored the remnants of the outbuildings as they appear in the historic photo below.

Archeological and historical investigations will continue as plans move forward to rehabilitate this property. Part of the County’s research will be to speak to family members or persons who may remember the property and its history.

One of several 18th century doors to survive.

Prior to the County’s obtaining possession of the property, the Rich Hill Historic Site was part of a 121-acre residential subdivision. The house today is located on a 2.4 acre lot gifted to the County in 2014. Not only does the County plan to restore the home but hopes to expand the size of the property as well.

Friends of Rich Hill is a group dedicated to the preservation and restoration of Rich Hill, an 18th century home in Charles County, Maryland.