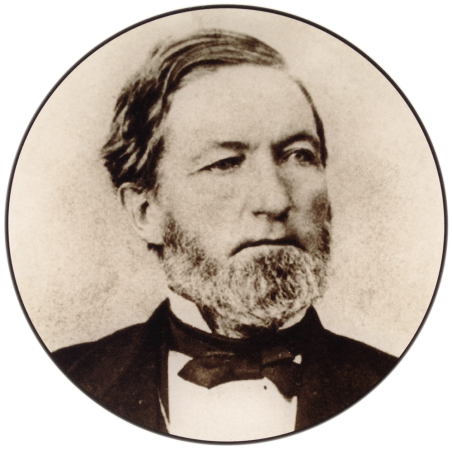 When Abraham Lincoln’s assassin, John Wilkes Booth, arrived at Rich Hill during the wee hours of April 16, 1865, he sent in motion of series of events that would have long reaching consequences for the occupants of the home. The reputation of Col. Samuel Cox, the owner of Rich Hill, as an ardent Southern sympathizer led Booth to his door. We don’t know what thoughts were racing through Cox’s head when he was face to face with the assassin on his doorstep, but, in the end, he decided he would assist the wounded man in some way. Cox allowed John Wilkes Booth and David Herold to enter his home for a meal but then sent them off into a nearby pine thicket, to be cared for by his foster brother, Thomas Jones.

Perhaps Cox hoped that his brief interaction and assistance to Booth would never be discovered. However, with a manhunt as massive as the one for Abraham Lincoln’s killer, no stone was left unturned. In the end, Cox was informed upon by Oswell Swan, the man who unwittingly guided the fugitives to Rich Hill. After Swan reported taking a man with a broken leg across the swamp, the authorities arrived at Rich Hill on April 24th to make arrests. Col. Cox was first held at the Bryantown Tavern where he was interrogated by Colonel Henry Wells. Cox knew he had to admit that some men had come to his house but, like Dr. Mudd, Cox claimed not to know the men’s identities. Cox told the authorities that he denied the men food, supplies, or assistance, and evicted them from his property. Cox was supported in his narrative by his son, Samuel Cox, Jr. and one of the family servants, Mary Swann. Unconvinced with this tale, especially when Oswell Swan claimed that the two men entered Rich Hill and stayed inside for a few hours, the authorities had Col. Cox transferred up to the Old Capitol Prison in Washington, D.C. on April 27th.

It was while he was imprisoned in Washington, that Col. Cox wrote the following letter to his wife, Walter Ann Cox.

Your most welcom[e] letters of the 18th also that of the 16th have been received and gave me great comfort, to hear from you all, also I received one from Sammy to day dated yesterday stating that he would leave for home to day (also Mary) and I know my dear wife it will give you as much pleasure to inform you, as it was for me to receive, permission just as your letter was received, to walk in the yard for exercise, which I have been deprived of until to day, having been confined to my room now for nearly four weeks. I there met several acquaintances, who are in my own predicament. I am glad to say I am as well as I could expect, my cough is not worse than it is sometimes at home. I have not heard a word from the authorities but learned that all the witnesses supposed to be in my case, were released and have gone home. I hope my dear wife it will not be a great while before I shall be released myself and will return to our dear old Home & loved ones. I feel exceedingly sorry to hear of the illness of Miss Matilda. I hope you will be able now that you have your horses to go and see her and not let her suffer for any thing. I hope Sammy arrives home safe. Should you want any groceries & necessarys, you had better write to our merchant in Baltimore for them unless you can wait until I can get home myself, but do not wait should you want any thing. Give my sincere love to Aunt W. and all friends. Continue my dear wife to unite with me in devout prayer to our merciful Father to guide, sustain, and so direct all things, that we may soon be restored to each other. [?] [?] mail. Your devoted husband,

As much as the government probably would have liked to put Col. Cox on trial, the only evidence that proved Cox’s complicity was Oswell Swan’s statement and even this testimony did not prove that Cox had any foresight of the assassination plot. The government really only wanted to try those who they believed were active conspirators in plotting Lincoln’s death, and Samuel Cox did not fit that charge. In the end, Col. Cox, was released from prison on June 3, 1865, after signing the oath of allegiance. Cox’s role in aiding the assassin and his accomplice was not widely known until Thomas Jones, another man who provided considerable assistance to Booth and Herold, publicly discussed and wrote about the events in the 1880’s and 1890’s. By then, however, Col. Cox was dead and the truth of his involvement could no longer hurt him.

This prison letter from Col. Cox provides us with a glimpse of a man worried for his wife’s well being during his incarceration, and his longing to return to his home of Rich Hill.

1 thought on “A Prison Letter from Col. Samuel Cox”

Friends of Rich Hill is a group dedicated to the preservation and restoration of Rich Hill, an 18th century home in Charles County, Maryland.